I am Not a Serial Killer by Dan Wells 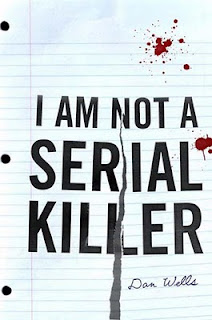 I had the pleasure of meeting Dan Wells. Know this: He is not scary. He is not a serial killer. He is a great guy...albeit with telekinetic book-signing abilities. (More about that at the end of the post...)
First Sentence: Mrs. Anderson was Dead.
A Favorite Passage: The dark thoughts were still there, underneath, but my actions stayed clean. In other words, I was really good at pretending to be normal. If you met me on the street, you'd never guess how much I wanted to kill you.
A Brief Summary: Dead bodies are normal to John. He likes them, actually. They don’t demand or expect the empathy he’s unable to offer. Perhaps that’s what gives him the objectivity to recognize that there’s something different about the body the police have just found behind the Wash-n-Dry Laundromat---and to appreciate what that difference means.
Now, for the first time, John has to confront a danger outside himself, a threat he can’t control, a menace to everything and everyone he would love...if only he could.
What I Liked About This Book: I liked John Wayne Cleaver, the main character. A lot. He is brutally honest about who he is - and he knows himself well. Going into this book I thought it was pure contemporary, and when an element of "otherness" was mentioned I was not pleased. (Hang on - this turns into a thing I like!) When the, um, "other" element manifested itself, it was done so masterfully that I was literally rocked off my socks - and loving it! I also like that John's "disability" became the exact ability he needed to attempt to save his small town. And the ending - very touching!
What I Didn't Like About This Book: There was a lot of exposition (with a couple of dead bodies thrown in - nice!) for a pretty hefty chunk of the beginning of the book. The action didn't really start until page 98; the first major (and I mean major) plot twist happened two pages after that. For me, this was the "tipping point" - when I could not stop reading until I got to the end. But it would have been nice if some action had come sooner. Also there was a "major" plot twist that I figured out early on...and it bugged me that as smart as John Wayne Cleaver is, it took him forever to figure out.
Book-Alikes: Instead of comparing this to books (which will give too much of the plot away) I'm going to do an Author-Alike: J.D. Sallinger meets Stephen King
My Rating: 4.5 out of 5 stars
Profanity: None
Drugs and Alcohol: None
Sexuality: None
Violence: Oh Yeah! Not for the faint at heart.
About the telekinetic signing abilities. When I met Dan at a conference he was signing books - but I had bought his book the day before and left it home. When I told him, he said not to worry - he would sign it telekinetically. He closed his eyes, put fingers to brow, concentrated hard, then looked right into my eyes and assured me it was signed. When I got home, guess what? His signature was on the title page.
~Suzette~
P.S. This book was read as part of the 2010 Debut Author Challenge.
Posted by Suzette Saxton at 7:40 PM

I like the short yet interesting way you describe the book. The main character is John Wayne Cleaver?

I get the Cleaver reference to violence, but the name Cleaver to me always reminds me of Beaver and Wally from Leave it to Beaver....

Wha? You must explain. Explain!

Does he have his signature printed on the page?

an it was good to see you today, friend. Your smile is full of light and life :)

I loved your summary of this book, I'm totally going to check it out now!

Ooh, signature via the mind. Me likey. Creepy. The book sounds intriguing. Thanks for sharing.

Really great review. I'm totally intrigued about the book AND the signature!!

Awesome! Now I want to read it.

I witnessed the telepathic signing, so I know it's true! Question--will it give me nightmares? You know me as well as anyone. I still can't decide whether to read it or not. Total horror wimp!

Just finished it! It was awesome! Great review. I am SO curious to see what happens in the second book, Mr. Monster!

Great review! And seriously?.... I have to admit that it's the telekinetic powers that make me want to read the book.

oh very cool-- JUST picked this book up and will start it as soon as i finish the anne lammott book i'm reading! so glad you have a review here!! i'll read it AFTER i finish the book and i'll see if we agree-