My dear friends, Hannah  and Lisseth from The Book Paparazzi Blog, are hosting a STUNG blog tour! If you want to be a part of the fun, click here!

XOXO, Bethany
Posted by Bethany Wiggins at 11:10 AM 2 comments: 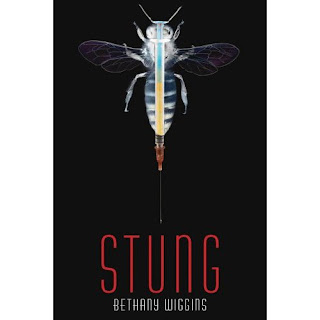 I can hardly believe it! STUNG comes out in less that three months (April 2). I still remember the day in November 2011 when I found out it wouldn't come out clear until April 2013. And now that is just around the corner! So, I though it would be fun to tell you how the idea for STUNG came about.

Sometime in 2010, at 4:40 a.m., I sat up in bed and gasped. I stumbled to the computer and typed one paragraph. And then I went back to sleep. When I got up at 7:00, I vaguely remembered waking from a horrifying nightmare in the wee hours and typing it up on the computer. When I sat down and read what I'd written, my heart started beating a little faster as I remembered the nightmare. Here it is (though this is not the awkward paragraph I wrote at 4:40 a.m. This is the nightmare with a little more detail).

I was in the house I grew up in, the house house beside the elementary school. But it was all wrong--dilapidated, falling apart, empty. And someone was in the house with me. When I turned to see who it was, I froze, because this person wasn't really a person. He was feral, and looked at me like he wanted to eat me. So I forced myself to unfreeze and ran. But he was fast. As I threw myself through an open window, his nails dug into my skin and tried to pull me back in.

The nightmare jumped. I was in the sewer, watching groups of people huddled together and eating food from cans. They wore rags, spoke in whispers, and had eyes that shifted toward every sound. And then I woke up.

And that is how the idea for STUNG was born.

Here's the blurb from the cover:

There is no cure for being stung.Fiona doesn’t remember going to sleep. But when she opens her eyes, she discovers her entire world has been altered—her house is abandoned and broken, and the entire neighborhood is barren and dead. Even stranger is the tattoo on her right hand—a black oval with five marks on either side—that she doesn’t remember getting but somehow knows she must cover at any cost. She’s right.Those bearing the tattoo have turned into mindless, violent beasts that roam the streets and sewers, preying upon the unbranded while a select few live protected inside a fortress-like wall, their lives devoted to rebuilding society and killing all who bear the mark.Now Fiona has awakened branded, alone—and on the wrong side of the wall.

Where do you get your inspiration?
Posted by Bethany Wiggins at 12:27 PM 8 comments: